The Samoan Youth Empowerment Initiative was founded in June of 2012 as a way to allow Samoan students a chance to develop cross-cultural awareness by traveling to the United States. The program seeks to engage the Samoan students in hands on activities and interaction with Americans with the understanding that Americans will gain just as much in terms of the sharing of cultures.

Our mission is to inspire the youth of Samoa to dream, but more importantly, to act. With a focus on sustainability, we are challenging the students to return to Samoa as bold leaders, active individuals and inspirational partners. They will reach out to share their experiences and then move to act on important issues facing their local communities, churches and families. They are the future of Samoa and we can EMPOWER them!

One Coconut at a Time 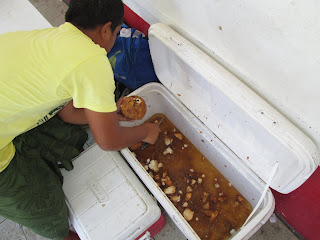 With visas in hand and airplane tickets purchased, our last weeks of fundraising are going to help with costs during the trip, such as health insurance, food, gas, and money for incidentals such as museums. Throughout the whole lead-up to the program, I have wanted to include the boys with the fundraising effort. For them this has to be in ways which are realistic with what they have and where they are.

I asked them to have some more coconut sales recently. Saulo joined me a week ago to sell coconuts to a cruise ship that was docking in Apia Harbor for a few hours. We had prepared the night before by making flower ulas (leis) to sell as well. I have been given ulas for the past three years but had never taken the time to make one, so I finally got my chance.

Since there was no bus from Saulo’s village last Thursday we couldn’t get coconuts from there, which would have been free, so we had to buy them at the market for 1 tala, which is about .43 U.S. cents. I bought 50 to begin with and then set up a small stand next to the boat where several other vendors were selling Samoan crafts and clothes to the tourists disembarking the boat.

The coconuts didn’t sell too fast as people were getting off the boat, but things sure did pick up in the afternoon as the sun got hotter. I ended up having to go back to the market to buy another 30 coconuts. We were able to sell them for $1.00 U.S. dollar to make a profit, but the real profit came from donations! Since the boat had mostly Americans on board, I would stop them and introduce myself as being from Michigan and most of the time they seemed interested. I even met a man who lives just 15 minutes from my house! What a small world.

Saulo was right there next to me helping throughout the long, hot day. With Saulo dressed in his ie lava lava, he worked his charm and really put forth so much effort. He became so confident and friendly and was talking to everyone about his trip. The most common remark people made to him when they heard he was going to Michigan in December was that he was going to freeze!

By the end of the day I was sunburned and our legs were ready for a rest. It was a productive day and we met some great people who really took an interest in the program. I think it taught Saulo more about how complete strangers are willing to lend a helping hand and really feel a connection to a program that will better the future of Samoan youth, while at the same time affecting Americans they meet with.

A couple days later, it was Milo and Neueli’s turn to sell the coconuts. This time we got the coconuts for free, having brought them from kua (the bush) and only expending sweat, which came about by climbing the trees, which of course was done by the boys.

We again had close to 70 coconuts and sold them all by 12 noon, just in time for Milo and Neueli to catch their bus back home. They too had a lot of fun and became more confident in making a sale to a stranger walking by on the street. They are quickly learning the hard work required for such a trip and in that sense, I believe the Samoan Youth Empowerment Program has already begun! 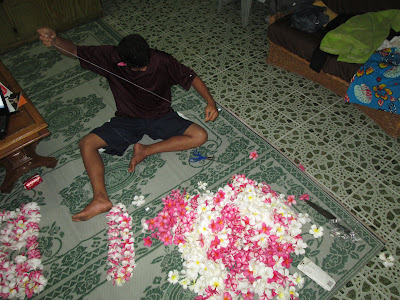 Saulo working on making the ulas the night before the sale. 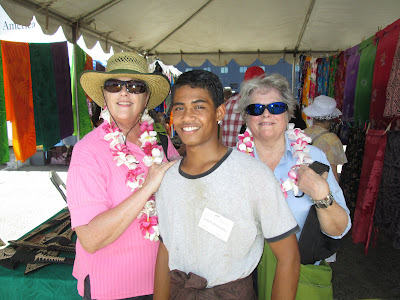 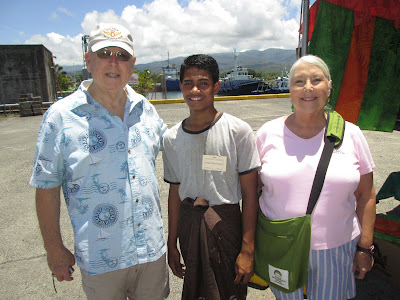 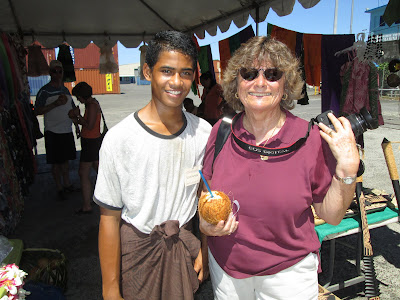 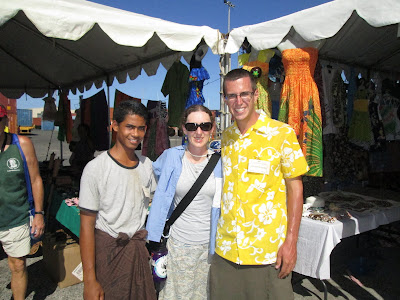 Katie, a Returned Peace Corps Volunteer from Paraguay was on the crusise ship with her parents and stopped to say hi to us and lend support! 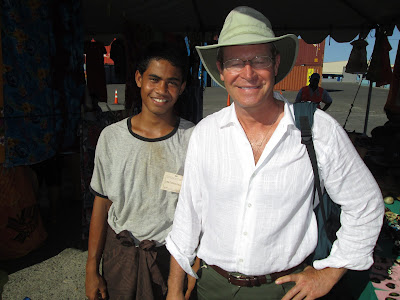 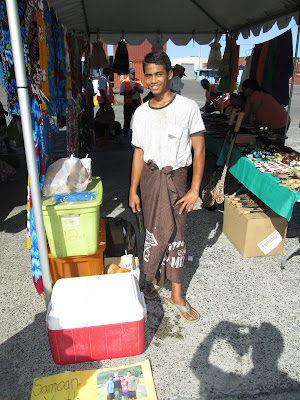 Saulo after a hard day of working! 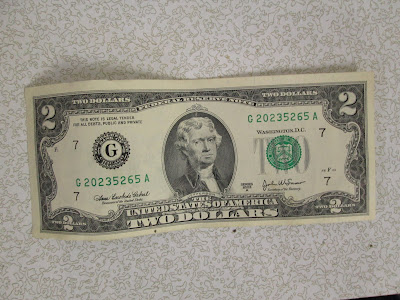 Getting American money from the people on the ship felt weird, as I'm use to Samoan money now, but when someone handed us a $2 bill, that was even stranger! 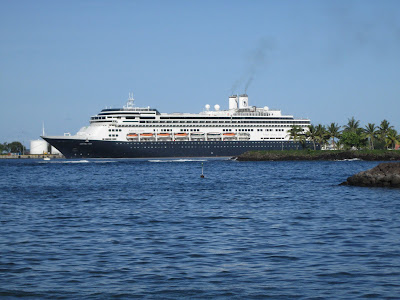 The cruise ship was heading to Hawaii from Samoa and then back to San Diego. 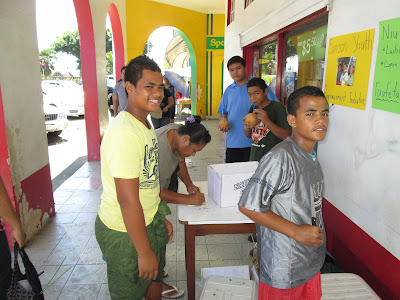 Milo and Neueli were busy on Saturday selling coconuts in front of one of the big supermarkets in the capital. Here they are hard at work.

We Have the Visas! 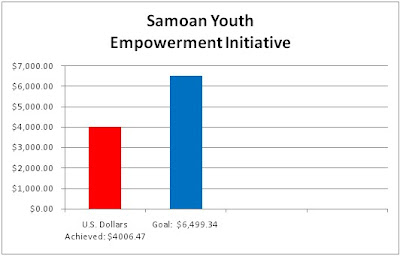 When times get tough, and the work gets tedious, we often tell ourselves “It will all be worth it in the end.” When we say that familiar phrase it sometimes feels foolish, but then things do work out, the work does pay off and we realize that we our stronger for what we went through.

We recently received word that the three students selected for this program were being issued their visas to visit the United States! Although we had to prepare for the visa interviews, after we had done our part it was basically out of our hands. Therefore, in that respect, I feel as though we have jumped our highest hurdle and landed safely on our feet. The smiles on the faces of Saulo, Neueli and Milo and the joy from their parents serves as motivation to continue our work to make this a life changing experience for them. This is not work we have been doing on our own. As I’ve told you from the beginning, I personally believe this to be guided by God, who has also led us to all of those who have been so generous to help.

To date we have raised $4,006.47 U.S. dollars, which is amazing! Every donation that comes in, whether from family, friends or complete strangers, I am blown away at people’s generosity. However, we still have some work to do, as we need $2,492.87 more to meet our goal which will insure we can care for the students properly during their stay in Michigan.

After raising $4,000 dollars in such a short amount of time, I am confident we will be able to reach our goal. If you feel like you would be interested in donating towards the program for the students, I thank you in advance. All you need to do is click on the “Donate” link on the top right of this page and take a few minutes to fill out the information. As outlined in our program proposal, we are planning a community culture night where you will be able to come and meet the students to learn about their culture and share yours. They are looking forward to meeting many of you who I hope will be able to join us.

In the meantime, thank you to all of those who have already given so generously! Together we are going to “share worlds and change lives.” 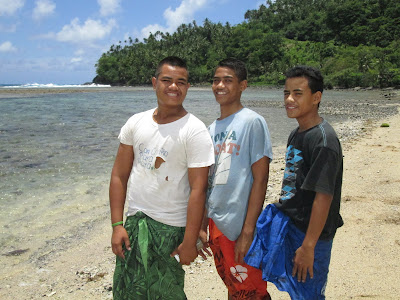 The boys may be enjoying the warm weather now, but come December they will be feeling a whole new climate in Michigan!

Checking In at Airport in Samoa